People of all ages are invited to participate in PRESTIGE's JENGA TOURNAMENT on Saturday, November 9, 2019 at 10:00 a.m. to benefit the Alzheimer's Association.

Our JENGA TOURNAMENT will be held at Memory Care of Westover Hills located at 10910 Town Center Drive, San Antonio, Texas 78251 and is open to anyone who wants to participate.

The entry fee for the JENGA TOURNAMENT is a suggested donation of $10.
​
The concept behind our JENGA TOURNAMENT is similar to a walk-a-thon.  Participants gather pledges for the time they spend playing. Every round of JENGA play generates funds for charity.  Each participant who plays and/or is an active enthusiastic member of the event tournament audience for at least half the time that the tournament takes place, automatically receives 5 rounds. Therefore, every participant begins with 5 rounds.

The JENGA TOURNAMENT will be a Single Elimination Tournament in which two players compete against each other using official game rules until there is a final JENGA TOURNAMENT WINNER.  The number of total tournament rounds will be determined by the total number of participants.

The JENGA TOURNAMENT WINNER will win the Grand Prize of Four (4) Daily General Admission Tickets to the San Antonio Zoo.  This is a retail value of approximately $76.00.
If you want to participate in the  JENGA TOURNAMENT, you can download the Official Pledge Form below. 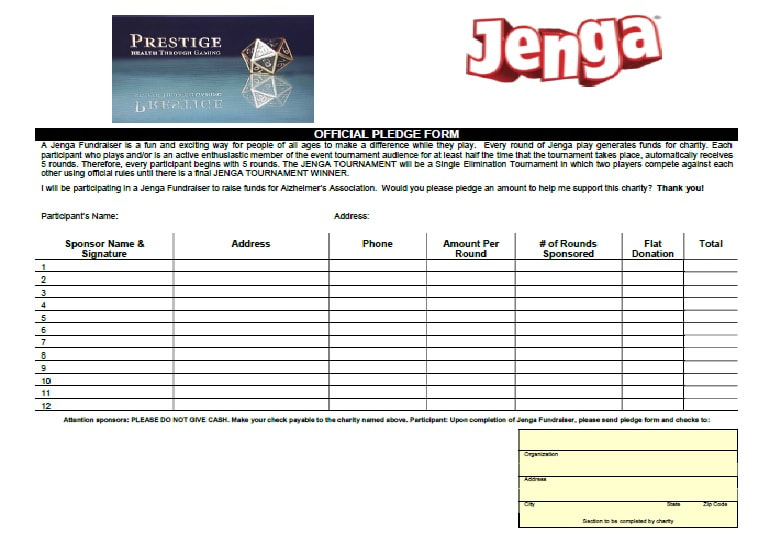 To set up the game, stack all of the blocks in levels of three placed next to each other along their long sides and at a right angle to the previous level.

Once the tower is built, the person who stacked the tower plays first. Moving in the game Jenga consists of:

1) taking one block on a turn from any level of the tower (except the one below an incomplete top level), and

2) placing it on the topmost level in order to complete it.

​Players may tap a block to find a loose one. Any blocks moved but not played should be replaced, unless doing so would make the tower fall. The turn ends when the next player touches the tower, or after ten seconds, whichever occurs first.

The game ends when the tower falls -- completely or if any block falls from the tower (other than the block a player moves on a turn).

The loser is the person who made the tower fall (i.e., whose turn it was when the tower fell).
Our JENGA TOURNAMENT will be held at Memory Care of Westover Hills located at 10910 Town Center Drive, San Antonio, Texas 78251.
Our JENGA TOURNAMENT is part of our FAMILY GAME DAY event to raise funds for the Alzheimer's Association. Please click below to find out more.

Unfortunately, we are unable to accept donations from residents of the following states:  District of Columbia, Florida, New Jersey, New York,  & Pennsylvania.